Teletext is a medium where encoded pages of information are broadcast alongside a television programme, and can be decoded on-screen by the viewer at the touch of a button.  Developed in the UK in the early 1970s, the last British teletext service was discontinued in the mid-2010s but teletext is still used in many countries around the world.

This website covers efforts to recover teletext pages from television programmes recorded on regular domestic videotape and other methods.

The Teletext Archaeologist archive consists of pages ranging from 1976 until 2018 and is continually expanding.

In particular, we are looking for:

…can you help to plug the gaps?

First-generation copies are best – copies do blur the teletext signals recorded on the tapes.  But if you don’t want to part with original tapes then a good quality dub can still be useful as long as it hasn’t been through a time-base corrector – these can overwrite the teletext data with their own signals.  Please do get in touch via the contact section below!

The latest curated finds are shared on Twitter – here are the latest posts: 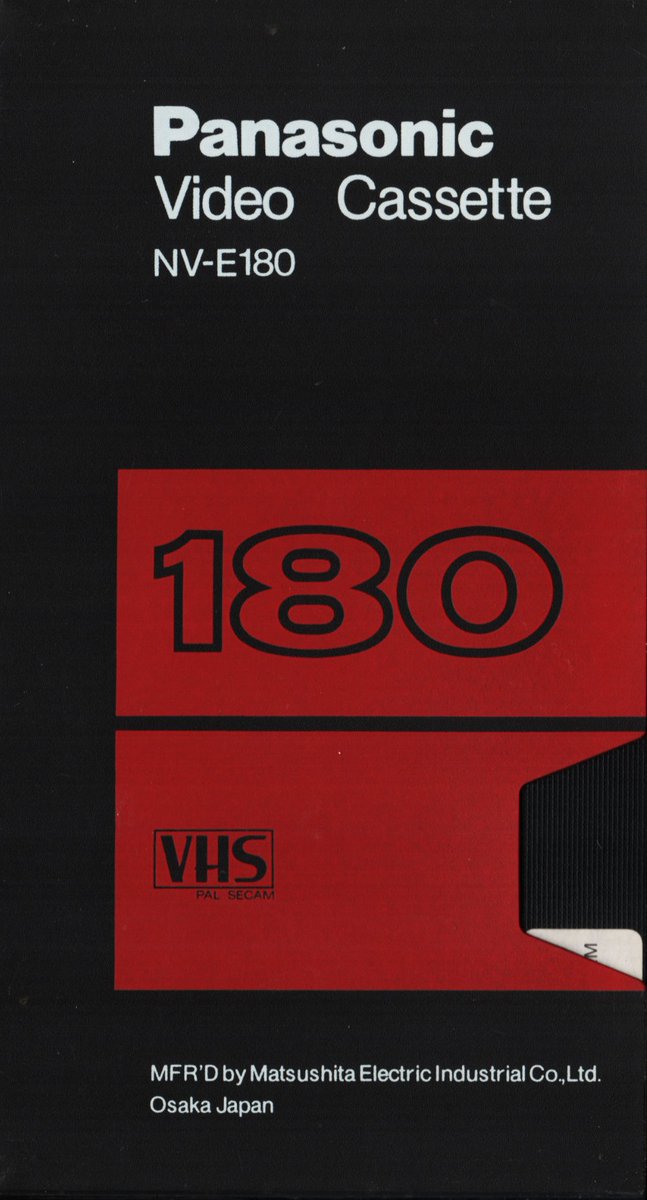 The Teletext Archaeologist ·
@grim_fandango
The teletext subtitles tech I've been working on will also *convert teletext subtitles to standard .SRT subtitle files* - this means that you can attach a file to VLC you use and it will play them back. Potentially useful for re-releases of old TV progs? https://t.co/lEgFMrp6kJ
View on Twitter
2
24

The Teletext Archaeologist ·
@grim_fandango
Teletext Player can now play video on screen as well as teletext, which means that soon you'll be able to watch recovered teletext subtitles as they were broadcast at the time! The clip below came from Betamax, and the subtitles were recovered from the same recording. https://t.co/6Ees0OPJOH
View on Twitter
9
55

The Teletext Archaeologist ·
@grim_fandango
Ooo, @russty_russ is this another secret teletext page to be found? https://t.co/cBe7rqtsuY
View on Twitter
Why Don't YouTube? @whydontyoutube
40 YEARS AGO TODAY: be careful what you wish for, Jools. https://t.co/NdyFtArQrM
0
8

The Teletext Archaeologist ·
@grim_fandango
Two months to wait for a Teletext Adapter! Even longer for Prestel! And for no good reason the example program Mac was working on on The Computer Programme (1983). That's all for tonight - have a great evening!! https://t.co/J3xY6Bb8dL
View on Twitter 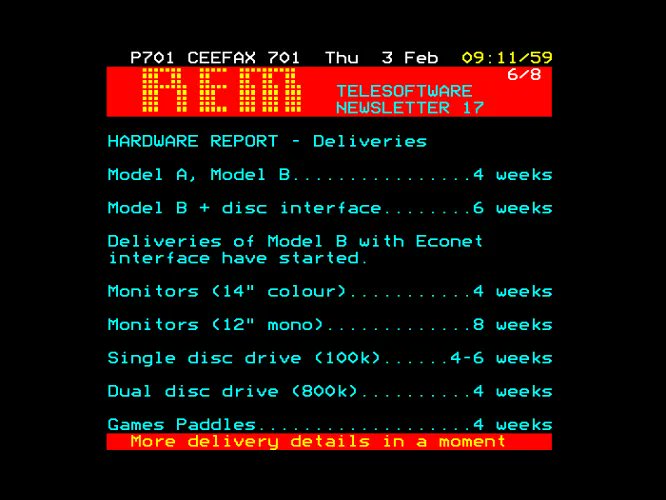 The Teletext Archaeologist ·
@grim_fandango
REM was the precursor to the Next computing magazine, ostensibly covering telesoftware but looking like feature creep is setting in. Here it outlines what's on that week's edition of the brilliant The Computer Programme. (1983) https://t.co/hOGA4vdkwH
View on Twitter 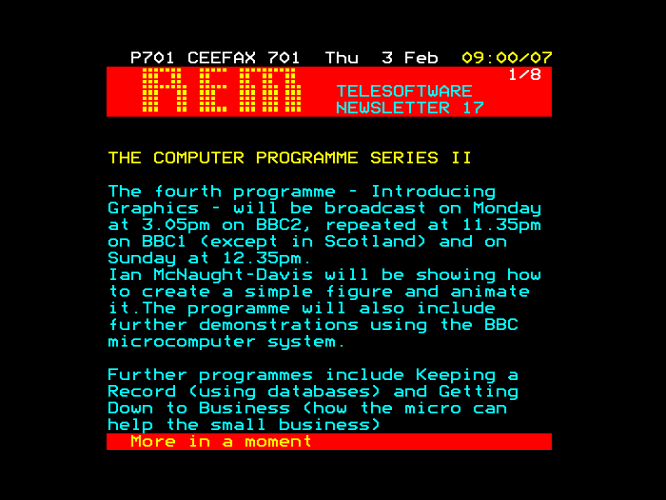 EXCITING NEWS! The Teletext Archive is launched – browse teletext services through your web browser, whether desktop, tablet or phone. You can do text searches, search by broadcaster and/or date, or just mooch around! https://archive.teletextarchaeologist.org

Great to speak to Dan and Ravi from the Retro Hour podcast about all things teletext! Please give it a listen and subscribe, it’s a very professionally produced show. Teletext: Back From The Dead – The Retro Hour EP147

The site now has a list of the services recovered so far, over 1200 teletext services from 1976-2016.  Scroll though at your peril here: https://teletextarchaeologist.org/the-archive/